ICS Village is a security company that builds defense systems for infrastructure networks. Oil, water supply, electricity and even sewer systems are commonly attacked. ICS is taking on the challenge to safeguarding our infrastructure. The industrial control systems they assembled will be used to instruct personnel for critical infrastructure defense. 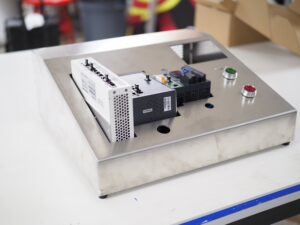 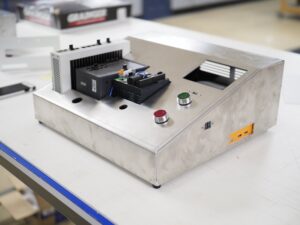 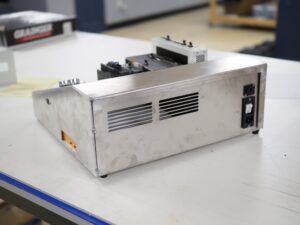 The unit is a laser cut aluminum shell, rendered and built here at Exhibit studios. Starting as a prototype, we meticulously measured and positioned every screw hole, so that the fiber laser could cut them to exact standards. Once we moved onto production for the actual display, we simultaneously designed graphics for the unit.

Most of the switches and computer systems were already pre-drawn. We sourced them from ICS affiliate companies. Some of these components are proprietary but we had the experience and know how to get the clearance to acquire them. This allowed us to make a very accurate 3D model of the unit so it could be sized exactly. The first prototype has only the smallest changes made to it. They were mainly, moving screw holes around and adding more air vents to control thermal conditions inside the case.

Drawing the unit saved a lot of time and money that could have been required to redesign the case. But thanks to the accuracy of CAD 3D models, just about everything fit on the first run. Thanks to 3D CAD we could pre check things like component size, fit and cable clutter inside. The customer was able to view the drawing over two months before we fabricated the first prototype. 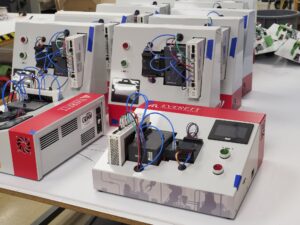 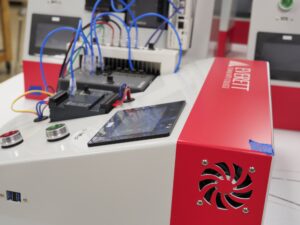 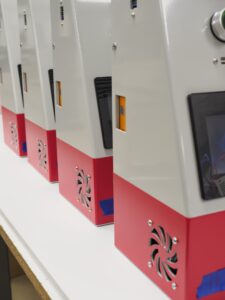 Now let us review what these devices accomplish. They simulate an internal network. Students using this machine must either defend the system or attack it. Doing so helps them learn how to better protect actual systems. Think of each one as a miniature power plant or perhaps a miniaturized oil refinery.

Some of the onboard hardware systems are PLCs, an industrial ML500G-50 computer, a Fortinet network switch and an Fortigat box. Each of these items are use in actual security networks. Bryson Bort from Grimm gives some really helpful info on a similar, though larger, device. You can see that here in a 360 virtual tour format. By the way, Exhibit Studios also created the 360 tour and the interactive environment. We have plans to expand it even farther in the future.

Bellow are some links to the 3D cases that have been created for this and other projects like it.